Burger King and Mess Marketing recently opened an Art Gallery/Event Space/Think Tank/Hipster artist collective in Chicago dubbed Burger King Studio. The concept is kind of interesting; you can mingle with artists at the occasional event and buy and customize t-shirts on the site. All-in-all, a great fit for BK’s well-known “have it your way” brand position, but there are some pieces of this campaign that have drawn a little too much inspiration from the creative community they’re aping.

This is a shot Burger King Studio’s Store side-by-side with Threadless.com — note the similarities in the presentation of the t-shirts, the use of hipster models and solicitations to participate/create your own shirts. Despite the similarities, I could give BK a pass on this one as more of an “inspired by” than a rip-off. 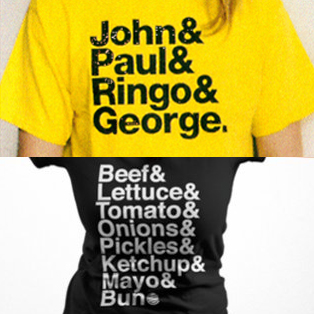 Unlike the Figure 1, this example is a 100% rip-off of a classic design created by Experimental Jetset. In fact, this design has been ripped so many times that Experimental Jetset has a section of their site dedicated to cataloging the infractions.

Not only is the t-shirt unoriginal, it kind of made me think of the old McDonalds Big Mac jingle. You know, the one where they sing the ingredients…

The jingle is about 15 seconds in…

What do you think? Should they get an “A” for going through the effort of trying something new in a well-trod space or is this simply another clumsy corporate co-opting of creative culture?