By now, everybody’s heard about (and commented extensively on) Microsoft’s $300 million campaign to rebrand Windows as a indispensable tool for a billions-strong community of like-minded individualists living a life without walls. The good people at CP+B have set the interwebs abuzz with criticism and praise for the campaign. Time will tell whether that buzz equals a successful campaign, but if history is any guide, the answer may be staring us in the face.

Fire up your flux capacitor and look back at the June 2008 issue of Fast Company—the issue with a smirking Alex Bogusky gracing the cover. By the time this issue hit the newsstands, many in the ad world had already heard about CP+B’s relationship with Microsoft and all the talk centered around what the campaign would look like. As it turns out, the answer lay in the opening spread of the feature article, pictured here: 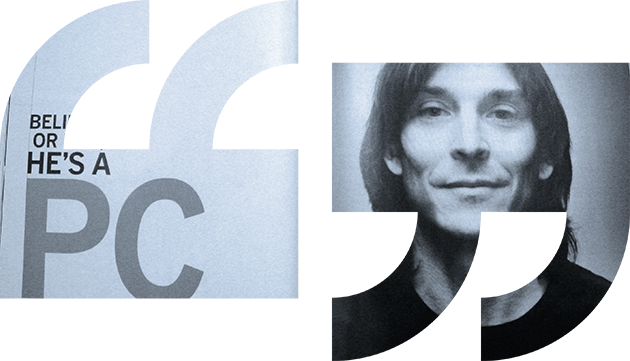 That headline again? “Believe it or not, he’s a PC.” Theme theme of the recently-launched campaign? “I’m a PC.”

If only we’d know then what we known now…